Jul Side Guards: Protecting Against The Deadliest Of Crashes

According to Volpe, the National Transportation Systems Center, “nearly half of bicyclists and more than one-quarter of pedestrians killed by a large truck first impact the side of a truck.” In order to prevent the fatal, crushing injuries related to impacting the side of a truck and becoming caught beneath its wheels, side guards have been developed to help prevent deaths and serious injuries.

Volpe defines truck side guards as “vehicle-based safety devices designed to keep pedestrians, bicyclists, and motorcyclists from being run over by a large truck’s rear wheels in a side-impact collision.” They are designed for trucks with high ground clearance and they work by covering and blocking the exposed space beneath.

These guards can be put onto existing trucks as well as incorporated into new ones as they are being constructed. The United Kingdom rolled out a national mandate for side guards and saw a 61% drop in cyclist fatalities along with a 20% drop in pedestrian fatalities related to side-impact collisions. 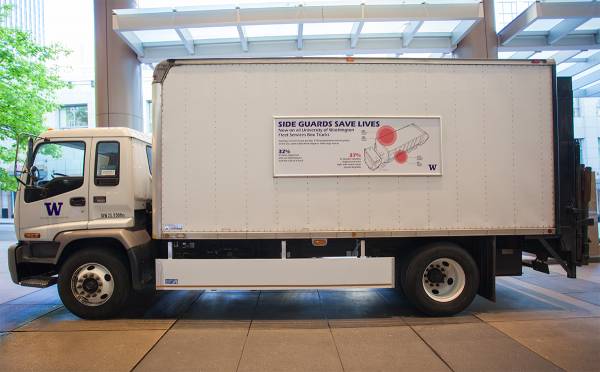 In addition to being incredible mechanisms for safety, side guards are also economically beneficial for trucking companies. Similar to side skirts used on trucks, side guards increase aerodynamics and save on fuel by decreasing drag. Annual savings could reach $5000, according to Volpe.

Many countries have mandated side guards just as the UK has, but only limited adoption has been seen in the United States. But, implementation has been growing in Portland, New York, Boston and Washington, D.C. We hope to see increased use across the country in the near future.